"...one of the best jazz singers in Canada, or anywhere for that matter... More than just a standards singer, she can do it all, and she does so with a rare sense of taste, imagination and sincerity." --Roger Levesque, Edmonton Journal (more...)

“… a wonderfully breezy singer who slips free of a song’s formal constraints at no risk to its familiar sentiments … an important Canadian jazz voice.” --Mark Miller, The Globe and Mail (more...)

“... a marvelous storyteller with a bag of vocal tricks big enough to compel constant attention, and the knack of making everything she attempts sound newly minted and admirably assured as her free spirit roams and experiments.” --Geoff Chapman, Toronto Star (more...) 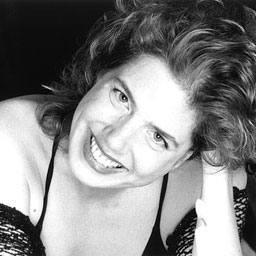 Since moving to Vancouver, BC from her home province of Nova Scotia in 1979, Kate Hammett-Vaughan has established a reputation as one of Canada’s most individual and creative jazz vocalists. Her expansive knowledge of jazz music, singers and song make her one of the country's most respected performers and teachers of the art of jazz singing.

As a performer, Hammett-Vaughan’s improvisational instincts and ease with all manner of material set her apart from many of her contemporaries. Her highly personal and expressive vocal style incorporates the breadth of her musical interests, from straight-ahead soulful ballads to hard-swinging grooves and improvisational adventures. Her approach is fresh and invigorating, paying tribute to the jazz tradition while interacting, exploring, and seeking to express herself in the moment. Equally at home as a front-line performer or as a member of an ensemble, singing straight-ahead swing or participating in free-improv adventures, Hammett-Vaughan makes sure that what she is performing remains accessible to her audience.

Hammett-Vaughan is passionate about her community, engaging and sharing with vocalists locally and across the country. As a teacher, her skills are wide-ranging. From one-on-one lessons to group workshops, master classes and community groups, her warm and personal approach is open-minded and inspirational. Read what Kate's students say...

A three-time Juno nominee, she has garnered critical praise from all corners for sanzaru (2012) a trio recording with the great Canadian jazz guitarist Bill Coon and the wonderful bassist/vocalist Adam Thomas, Imagination: Live At The Cellar (2008) a duo with guitarist Bill Coon, her trio recording So Lucky To Be Me (2006), and three releases with her marvelous long-time quintet, Eclipse (2004), Devil May Care (2002) and How My Heart Sings (1999). She also appears on two acclaimed recordings by The Now Orchestra – Wowow (1999) and The Shadowgraph Series (2001) – and on a variety of other projects including Conspiracy: Art Songs for Improvisers (2002), which features her as vocalist on a variety of compositions by Vancouver composers and on Poor Boy: Songs of Nick Drake (2002), the Songlines tribute to Nick Drake. Hammett-Vaughan has also received numerous nominations from the Canadian Independent Music Awards and from the National Jazz Awards including Best Jazz Vocalist and Best Jazz Vocal Recording. She has worked in a number of ensembles over the last three decades, the most notable being her own Quintet and Trio, her long-time guitar/voice dup with Bill Coon and her bass/voice duo with André Lachance, and in the avant-garde: the improvising jazz trio Garbo’s Hat, and the acclaimed large ensemble, the NOW Orchestra.

Hammett-Vaughan's artistic sensibilities and musical interests have led her to a variety of related projects, including film scores, guest hosting of CBC television and radio shows, collaborations with modern dance artists and performance artists, and a fulfilling career as a teacher.